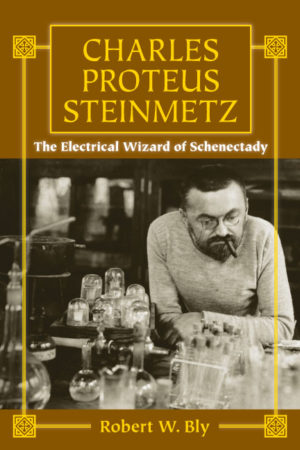 The Electrical Wizard of Schenectady

Charles Proteus Steinmetz presents the amazing life story of a forgotten genius who created the fundamental infrastructure that powers the modern world.

Thomas Alva Edison and Nikola Tesla have the glory, but the greatest electrical wizard of them all was Charles Proteus Steinmetz (1865–1923). Revered in the late 19th and early 20th centuries as a genius, but largely forgotten today, Steinmetz made the modern world possible through his revolutionary work to develop AC electricity transmission, the technology underlying today’s power grid. More than just a great scientist, Steinmetz was also one of the most colorful characters in American life. Standing just four feet tall with a pronounced spine curvature, Steinmetz was as well known for his unconventional political opinions, his fierce advocacy for social progress and education, his unusual home life and his private menagerie as for his technical achievements.

Charles Proteus Steinmetz gives a full appreciation of both the scientific achievements and remarkable personal life of this extraordinary man. Author Robert W. Bly, an acclaimed technology writer, gives a complete but reader-friendly account of the science of generating and transmitting electricity that will both educate readers and help them fully understand the importance of Steinmetz’s work.

Bly also writes sensitively of the struggles and joys of Steinmetz’s complex private life. A socialist and a political exile from Imperial Germany, Steinmetz overcame physical challenges and poverty to become one of the most influential scientific leaders of the United States. Steinmetz refused to marry or have children to avoid passing on his hereditary disabilities, but he created a family for himself by adopting his lab assistant and being a grandfather to his adoptive son’s children.

The first full biography of Steinmetz in many years, Charles Proteus Steinmetz brings the life, passions, and achievements of a great man to a new generation.

About the Author: Robert W. Bly has nearly four decades of experience as a science and technology writer. He is the author of more than 95 books and numerous articles on a variety of technical and nontechnical subjects. His science website is www.mychemset.com and his writing website is www.bly.com.