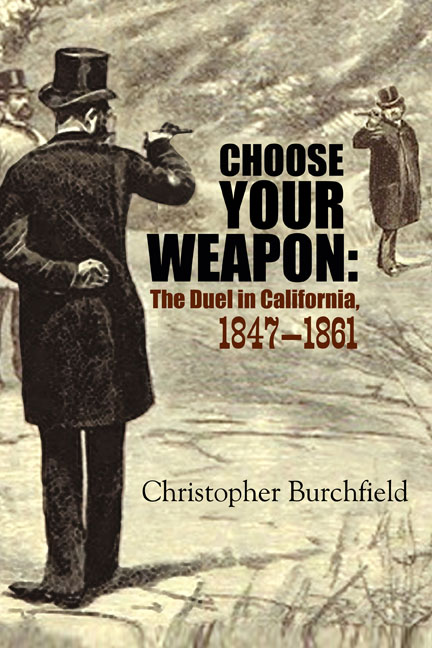 The Duel in California, 1847–1861
by Christopher Burchfield
In Gold Rush California, gunfighters weren’t outlaws or desperadoes — they were often prominent journalists, state legislators, governors, even the Chief Justice of the State Supreme Court. For the respectable gentlemen of the 1850s, honor or dishonor — and life or death — could be decided with a single shot.

Choose Your Weapon brings to life a now-forgotten time, when California was a raw new state with politics as violent as any banana republic. This was the Golden Age of dueling, when prominent citizens would settle their political and personal disputes with gunfire, according to the venerable law of the code duello.

In the heyday of dueling culture, men from all walks of life, from politicians to manual laborers, fought formal duels. Duels could be triggered by political battles to shape state government — or they could be fought over a woman or a personal slight. Braggarts often proved to be cowards on the field of honor, and many a quiet and peaceable man could shoot with deadly accuracy when reputation was at stake.

Choose Your Weapon documents every notable duel to have occurred in California, from the arrival of U.S. dueling culture with the first American settlers to the end of dueling’s popularity on the eve of the Civil War. Drawing from contemporary newspaper accounts, historian Christopher Burchfield ascertains all that can be known about California’s duels, and his evidence overturns many common beliefs about California’s dueling era.

Among Burchfield’s notable findings, he demonstrates that the most famous duel in California history, between Senator David C. Broderick and California Supreme Court Justice David Terry, was more about a personal slight than the future of slavery — and the duel was decided entirely by the deceptive hair trigger of a defective pistol.

An exemplary history of an exciting era, Choose Your Weapon is a must-read for fans of the Old West.

About the Author: Christopher Burchfield has been writing about Gold Rush history for more than 30 years for numerous magazines and newspapers, including The Californians, California Mining Journal, The California Territorial, California Highway Patrol, and Old West and True West magazines. Burchfield and his wife Genendal live in Chico, California.