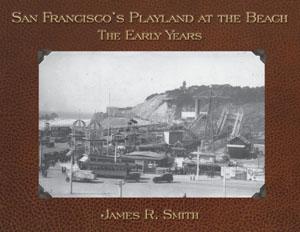 Product code: 1847
Availability: out of stock

Playland at the Beach was a magical place, revered in the hearts of San Franciscans and all who visited. Playland wasn't just another amusement park: it had a special identity that encompassed socialization, dining, playing, strolling and sight-seeing that was purely San Francisco. From the 1920s to the 1970s, Playland enthralled generations. Everyone who visited it recognized its uniqueness, and its pioneering rides and attractions inspired the designers of the amusement parks that followed.

San Francisco's Playland at the Beach leads the reader through a chapter-by-chapter tour of the setting and evolution of Playland during its formative era. Photographs trace the development of the site from steam shovels carving the bare sand dunes of Ocean Beach and the construction of the main Playland buildings. Each of Playland?s famous rides receives its own chapter, with photographs showing both how the rides were built and how they looked in their prime. Other chapters cover Playland's attractions, arcade amusements, restaurants, and nightclubs. Incidental photographs depict the clothes, cars, people, and customs of the time.

The book also covers some of the most notable events that happened at Playland in the 1930s, including the Century of Progress exhibit of 1934 and a labor strike that paralyzed the park in the mid-30s. The book includes a complete timeline and history of Playland from its beginning to its destruction in 1972.

San Francisco's Playland at the Beach gives readers an enchanting vision of the fun, sights, sounds, and flavors of a glamorous and care-free time. Take a turn on the Big Dipper roller coaster, the Shoot the Chutes water ride, the DodgEm bumper cars, and the six-story giant slide at the Fun House. Taste a Pie Shop blackberry pie, Topsy's chicken, and a Bull Pupp enchilada.

Listen to the staccato of the four shooting galleries, the rumble of the wooden roller coaster and the screams of its passengers, the orchestrion playing marching tunes, and the raucous laughter of Laffing Sal. Richly illustrated and painstakingly researched, San Francisco's Playland at the Beach is a time machine fun ride through little-known history.