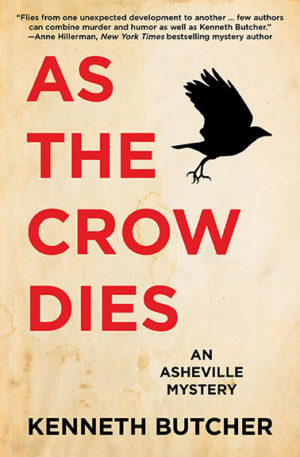 How do you solve a murder when the main witness is a crow? A bookish police detective and his roller derby star partner investigate a quirky mystery involving superintelligent animals, military conspiracy ... and murder.

When a body is found in the River Arts District of Asheville, the man on the case is police lieutenant Ira Segal, recently returned to semi-active status after being shot in the line of duty and struggling with depression and PTSD. Segal maintains his precarious composure by carrying paperback books in his coat pockets as security blankets, changing authors with his mood — Elmore Leonard on good days, Ernest Hemingway on bad ones. Segal isn't sure he's up to investigating a murder, and neither is his partner, military veteran and local roller derby star Sgt. Dinah “Dinosaur” Rudisill.

Segal discovers that the victim worked for the mysterious start-up company Creatures 2.0, which trains animals to acquire uncanny capabilities. Creature 2.0's eccentric founder, Francis Elah, has gone missing, and no one can find him, not even Elah's top client, the Office of Naval Intelligence.

As Segal and Rudisill investigate the murder and Elah's disappearance, they encounter the bizarre animals Elah trained, including a raccoon who rolls cigarettes, pigeons who follow a priest to church, and a crow named Richard, who has a disconcerting way of bringing relevant evidence to Segal and Rudisill's attention.

When the trail leads to a shadowy military contractor, more murders, and a threat to national security, Segal and Rudisill don't know who to trust and face a dangerous confrontation.