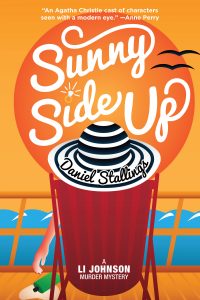 "An Agatha Christie cast of characters seen with a modern eye, and with startling moments of both insight and compassion." —Anne Perry

For 20-year-old Liam "Li" Johnson, a job as a cruise ship waiter was supposed to be a way to get over his father’s death and earn enough money to go back to college. Instead, Li is struggling to maintain his sanity while coping with the demands of a sadistic maître d’ and a boatload of entitled rich jerk passengers.