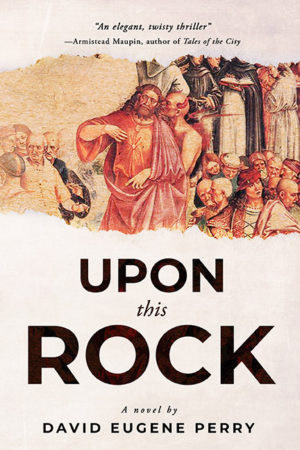 An American couple in Italy investigate the suicide of a cleric in the picturesque Italian city of Orvieto — and find themselves plunged into a conspiracy that may destroy the Catholic Church. In the stunning thriller Upon This Rock, San Francisco business executive Lee Maury and his husband Adriano come to Orvieto to soak in the city's beauty and rich history, but Lee becomes fascinated with a local tragedy, the suicide one year earlier of Deacon Andrea, a much-loved candidate for the priesthood.

Growing obsessed with learning the truth behind Andrea's death, Lee finds that everyone in Orvieto has some connection with Andrea: the handsome former Swiss Guard and bisexual prostitute Grigori; the kindly elderly priest Don Bello; the gossipy American expat blogger Lady Peg; the secretive young German doctor Luka; the irascible nonagenarian baker La Dona Volsini and her USA-loving grandson Marco; African immigrant street musician Dawud and his sister Maryam, who is en route to Italy with black market smugglers; the exiled Episcopal priest Rev. Vicki; Orvieto's new bishop, Arnaud, a sexually conflicted member of Opus Dei; the powerful head of the Vatican press office Cardinal Maltoni; and the secretive political fixer Magda Carter. Woven throughout is a 500-year-old backstory — the plight of Medici Pope Clement VII who sought refuge in Orvieto following the Sack of Rome, whose time in Orvieto is somehow linked to the mysteries of the present.

As Lee and Adriano struggle to make sense of the relationships tying all these people to Andrea's suicide, they stumble upon a conspiracy of terrorism, human trafficking, and a plot to destroy one of the Church's most sacred shrines. Before they know it, Lee and Adriano's dream vacation becomes a race to save innocent lives — and not get killed in the process.