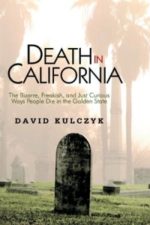 The Bizarre, Freakish, and Just Curious Ways People Die in the Golden State.

This book’s aim is to encompass shocking murders and accidents that at the time shook the very soul of Californians, but eventually and gratefully faded from memory. California has always been a destination for people with dreams of fame and fortune. Anything is possible in California, and when anything is possible, death always lurks nearby. “Death in California” is an historic manuscript detailing the more arcane ways people have died in the Golden State.

The thirty-one vignettes in “Death in California” range from a description of being one of the fourteen different tourists to be swept to their deaths over Vernal Falls in Yosemite National Park, to singer Bob “Bear” Hite of the blues/boogie band Canned Heat overdosing on heroin in a seedy Hollywood nightclub. The book’s diverse set of deaths include a tale of torture and murder by a chicken farmer in the desert in 1926, as well as the tragedy of a 10- ton jet airplane crashing into a Bay Area apartment kitchen in 1973. The litany of freakish and bizarre deaths in California also include hangings, gun accidents, crashes and suicide. Social status is no barrier: both the famous and obscure are profiled. 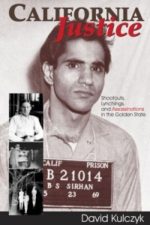 Introducing the victims and perpetrators responsible for California’s most notorious shootouts, lynchings, and assassinations, this account shows how homemade justice is never black-and-white. In relating these histories, this discussion also analyzes how and why Hollywood storylines almost always follow the same skewed and unrealistic arc in which the bad guys abuse the good guys, the good guy take the high road until the bad guy has gone too far, and the good guy picks off the bad guys, one by one, in an increasingly dramatic fashion.