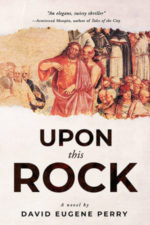 As Lee and Adriano struggle to make sense of the relationships tying all these people to Andrea’s suicide, they stumble upon a conspiracy of terrorism, human trafficking, and a plot to plant a nuclear dirty bomb in the tomb of St. Peter. Before they know it, Lee and Adriano’s dream vacation becomes a race to save innocent lives — and not get killed in the process.

Item currently available for pre-order. Will ship on publication.