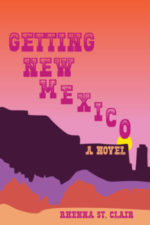 About the Author: Rhenna St. Clair, a Portland, Oregon, native, arrived in New Mexico in 1992. Fascinated by the beauty of the land and its history, the archaeological sites and the mix of cultures, she “can’t imagine living anywhere else.” St. Clair practices Chinese medicine and acupuncture in northern New Mexico. Her poetry has been published in Perspective(s) Magazine, the literary journal of San Juan College. Getting New Mexico is her first novel.