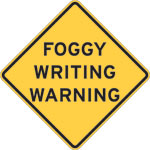 Every week, Don McNair, author of “Editor-Proof Your Writing,” shares  his expert tips on how to self-edit your fiction manuscript to clear up foggy writing and produce sparkling copy that will attract agents, editors, publishers, readers, and sales.

We use extra words and phrases without thinking. They sound and look right, so we think they must be right. But they are extra, nonetheless. They add fog, and fog chases readers away. So let’s target these unneeded words.

Consider, for example, this sentence:

Ahead of them was a muddy, rutted road.

Well, who else could it be ahead of, if not them? Take “of them” out, to make the sentence read:

Ahead was a muddy, rutted road.

The women brought the children toys to play with.

Think about it: What else would the children do with the toys if not play with them? We should obviously change this sentence to read:

The women brought the children toys.

Perhaps the most egregious example of overused words is that. I recently removed more than eight hundred thats from a novel, making the copy much easier to read. Here’s a common example:

I think that I’ll take it.

Change the sentence to read:

I think I’ll take it.

You’ll probably find many unnecessary thats in your Work In Progress. We use the word for many purposes: an adjective (that string is broken), a pronoun (after that, she shut up), an adverb (is it that bad?), and a conjunction. It’s this last use—where that introduces a clause—that’s foggy.

She knew that Jack was going to meet June.

What would happen if we took the that out? Well, the sentence would become clearer:

She knew Jack was going to meet June.

Then is another overused word. It’s used as a noun (until then, I’ll stay), an adjective (Harding, the then president), and in several ways as an adverb. The latter—to show time, space, or order—is overused in writing.

Some unedited manuscripts are peppered with thens, making them sound like kindergarten children’s recital of what they did last summer:

“We went to Disney World, then we visited ‘It’s a Small World,’ then we…”

In many cases the then is not needed, since we usually tell stories in chronological order and the then is assumed.

Consider its use in this sentence:

Then her face clouded over.

Something caused that girl’s face to cloud over. Her boyfriend broke up with her, she had a sad thought—something happened first and we, the reader, often know what it was. Since that’s true, why can’t we edit the line to read: “Her face clouded over.” Well, we can!

Suddenly is another overused word. Consider, for example, this sentence:

Suddenly the trail ended in a clearing.

How else can that trail end, if not suddenly? Slowly? Of course it was sudden. So why mention it? The author really meant the viewpoint character saw the clearing ahead. So why not just say:

The trail ended in a clearing.

A clearing appeared ahead.

Suddenly infers something happens fast, without warning. But often the sentence already says that (if it doesn’t, rewrite it so it does). It’s another belt-and-suspenders case. For example:

Aren’t all hiccups sudden? Have you ever planned one? Change that line to:

Doesn’t that tell the story?

Just is another throwaway word. It is used both as an adjective (just deserts, just ruler, just appraisal) and an adverb. It’s the latter use that sometimes gives us problems.

There’s often no need to use just. Consider a fictional character who saw a friend running and called out to her to stop, but she doesn’t. He tells us:

Do we need that just? It infers the friend is ignoring the command. But doesn’t the sentence do that without the word?

How about this sentence?

She was just about ready to do it.

Let’s leave the word just out, to leave this:

She was about ready to do it.

Doesn’t that say the same thing? What meaning does just add?

The list of throwaway words is long. Other common examples are up, down, out, off, over, and very. Why not put these and the above words into your word processor’s “find” tool, and decide which ones you should delete?

Don McNair is a professional editor and the author of ten published novels and nonfiction books. His latest book is “Editor-Proof Your Writing: 21 Steps to the Clear Prose Publishers and Agents Crave,” available from Quill Driver Books.