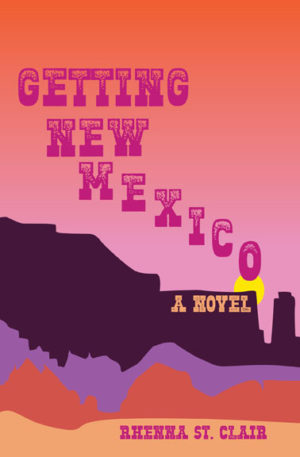 Congratulations to Pace Press author Rhenna St. Clair, who has won the New Mexico-Arizona Book Award for her novel Getting New Mexico, a sharp romantic comedy about a New York scoundrel who is morally redeemed by the quirky, egalitarian culture of the Southwest.

The New Mexico-Arizona Book Awards, presented by the New Mexico Book Co-op, is one of the largest and most prestigious book awards programs in the Southwest, celebrating the culture and creativity of New Mexico and Arizona authors.

Steeped in New Mexico culture, values, and eccentricities, Getting New Mexico is a delightful, tongue-in-cheek contrast between the often meretricious values of large cities compared to the deeper values of the Southwest. A comic novel about second chances, redemption and finding late-in-love love, “Getting New Mexico” tells the story of Aaron Schuyler, a drunk, cheat, exploiter and — worst of all — a lifelong New Yorker, whose life and character is transformed by the quirky, anti-elitist culture of New Mexico.

After his alcoholism and wayward behavior lose him his family, livelihood and home, Schuyler is forced by his formidable Winston Churchill-worshipping mother to move to Santa Fe. Schuyler finds himself in a culture where self-reliance and compassion counts more than power or status. Stripped of his former wealth and reduced to wearing clothes from Walmart, Schuyler finds that people no longer excuse his bad behavior. With his survival depending on keeping a real job, Schuyler is forced to develop new habits of responsibility and sobriety.

Along the way, Schuyler meets unconventional people unlike any he’s ever known — the enigmatic Indian artist Lone Goose; his aloof landlord who was the lover of Schuyler’s beloved uncle; the blue collar Sam’s Club workers who accept him as one of their own; and above all, the beautiful and no-nonsense Anita Chatterjee, HR director at Sam’s Club, with whom Schuyler is immediately smitten. For the first time in his life, Schuyler wants to be a better person — and shaking scorpions out of his boots seems like a fair trade.

A highly entertaining story of late-in-life reinvention, Getting New Mexico makes readers root for the bad guy to become the good guy he can be.