“Apprehensions & Convictions”: An explosive true-crime memoir by an unlikely cop 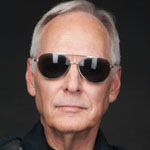 What makes a man give up a successful career to become a street cop … at age 50? Retired police detective Mark Johnson explains his reasons in his new memoir “Apprehensions & Convictions: Adventures of a 50-Year-Old Rookie Cop,” new this month from Quill Driver Books.

As the executive director of the United Way of Mobile, Alabama, Johnson had stability, a decent salary and a respected position in the community. What he didn’t have was a sense of purpose. Disillusioned with the day-to-day compromises of charity work and looking for a way to make a real difference, Johnson at age 50 became the oldest rookie in the Mobile Police Department.

Defying the skepticism of his wife, the derision of the younger cops who called him “Pawpaw,” and his own self-doubts, Johnson rose to become a detective and a highly decorated officer. But it wasn’t a smooth ascent. A civilized man whose first instinct is to help people, Johnson learned the hard way that some men can only be subdued with brute force and some chronic criminals refuse to be redeemed.

In a crisp first-person narrative that is by turns action-packed and contemplative, Johnson writes frankly of the experiences, challenges, disillusionments and dangers that transformed him from a social worker to a cop. In salty, slangy language that crackles with the energy of the streets, “Apprehensions & Convictions” presents vivid portraits of the addicts, dealers, prostitutes, pimps, thieves, murderers, crime victims and ordinary citizens of Johnson’s city.

A fascinating story that sweeps from the frustrations of an overprivileged youth to the dysfunction of the Mobile ghetto to a dramatic confrontation with an escaped cop killer, “Apprehensions & Convictions” is a compelling new memoir of a remarkable life.

In this television interview, Johnson describes the armed confrontation that was perhaps the most dramatic of his 12-year police career.

One Response to “Apprehensions & Convictions”: An explosive true-crime memoir by an unlikely cop