In an old house on Martha’s Vineyard, the dead won’t stay silent — and a marriage disintegrates — in the new horror novel In the Midst of the Sea 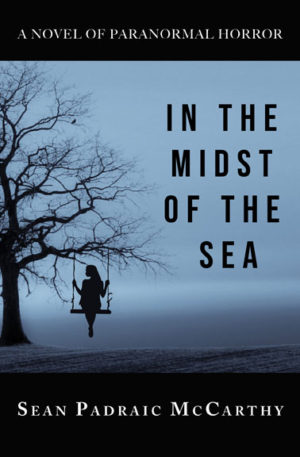 “Dark, emotional, and incredibly creepy … In the Midst of the Sea is a haunting debut from a talented new voice.” —Foreword Reviews

An old house on a lonely island contains secrets, remnants of the past and an explosive marriage in the new horror novel In the Midst of the Sea (Pace Press, May 1, 2019) by Sean Padraic McCarthy.

A moody, atmospheric and terrifying thriller reminiscent of classic Stephen King, In the Midst of the Sea is a gripping, elegantly written story of supernatural horror and psychological realism that slowly reveals that the greatest danger is the people closest to you in your own home.

But in the winter, when the tourists go home and the island is deserted, Diana is afraid she’s going crazy. Specters of people long dead flicker in and out of her vision. The antique dolls in her house never stay where they’re put. Samantha suddenly has a whole group of imaginary friends who live in the house and tell her terrible things.

While Diana doubts her sanity, Ford is becoming increasingly moody, unpredictable, and violent. Has the strange atmosphere the house affected him as well? Or is he finally revealing the person he always was? Diana’s marriage slowly disintegrates, as Ford develops a possessive jealousy over Diana, Samantha and the house.

In another parallel between Elizabeth’s and Diana’s lives, both meet men who seem to understand the forces connecting them. In the 1870s, Elizabeth learns of the spirit world from the trance medium Paschal Beverly Randolph, while in the modern era Diana meets the painter Michael Chiaro, who believes that Diana is experiencing psychic imprints from the past.

With Michael’s help, Diana begins to understand how the terrible events that happened to Elizabeth have left a lingering imprint in her house that is creating her bizarre experiences and tapping into Ford’s consuming rage.

Soon Diana is forced to act to defend herself. The past, the present, the living and the dead fatally intertwine, and Diana realizes she and her daughter must escape — if Ford and the house will let her.

Combining a realistic portrayal of a destructive relationship with a sophisticated variation on classic horror, In the Midst of the Sea is an impressive debut novel by a gifted new writer.