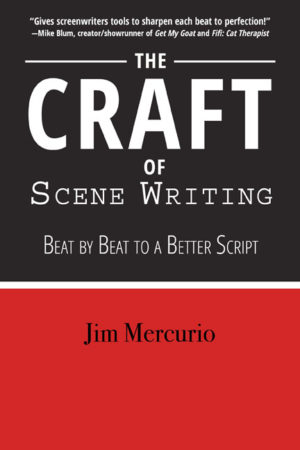 No one comes out of a movie talking about structure. What audiences love and remember about a movie are great scenes. Marlon Brando in the back seat in On the Waterfront giving his “I could’a been a contender” speech. Meg Ryan’s fake orgasm in Katz’s Deli in When Harry Met Sally with the climactic punch line: “I’ll have what she’s having.” In Superbad, Jonah Hill professing “I love you” to his friend Michael Cera by touching his nose with a “boop.” Great scenes elevate a film script from ho-hum to extraordinary — and from the slush pile to sellable.

While previous screenwriting guides emphasize story structure, The Craft of Scene Writing is the first book for screenwriters that focuses entirely on writing great scenes. Other books on screenwriting look at turning points, reversals and surprises at a big-picture, structural level of acts and sequences; The Craft of Scene Writing examines the same elements at the microscopic level of beats, scenes, dialogue and even action description.

Mercurio argues that while story structure has been honed to a near-exact science, structure alone doesn’t ensure a successful screenplay. It’s the detailed craftwork of scene writing that breathes life into a story and makes audiences identify with characters and care about their fates. Great scenes develop a screenwriter’s voice and make a script stand out from paint-by-numbers imitations that merely follow the story structure formulas.

reversal. And when a scene incorporates both a twist in the plot and a change in the characters’ internal states, it has the greatest potential to profoundly engage an audience.

After establishing the principles of scene writing, The Craft of Scene Writing goes on to teach readers practical techniques to immediately improve their scenes and scripts. Mercurio demonstrates that every element that a writer wants to develop in a script — motivation, conflict, resolution, character growth — must be dramatized in dialogue and action at the scene level.

The Craft of Scene Writing also gives additional advice on polishing one’s scenes during the rewriting process, plus Mercurio’s quick guide to screenwriting principles, “14 Steps to a Better Screenplay.”

The Craft of Scene Writing: Beat by Beat to a Better Script