New! Relive the glamour of Hollywood’s Golden Age with “1939: The Making of Six Great Films from Hollywood’s Greatest Year” 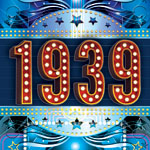 Our newest history book, “1939: The Making of Six Great Films from Hollywood’s Greatest Year” by Charles F. Adams, is a wonderfully nostalgic trip back in time to Hollywood’s classic era, and it’s already winning some rave reviews:

Released just in time for Oscar season, “1939” commemorates the most amazing year in American movie history, a year that saw the release of some of the best loved classic films and the summit of Hollywood’s glamor and cultural achievement.

“1939” profiles the making of six of the most significant films of 1939: “Gone with the Wind,” “Stagecoach,” “Mr. Smith Goes to Washington,” “The Hound of the Baskervilles,” “The Adventures of Huckleberry Finn,” and “The Wizard of Oz,” covering each film from the origins of the script to the finished film’s debut and critical receptions. The story of each film is thoroughly illustrated with authentic production photos that give amazing behind-the-scenes glimpses of old Hollywood at work.

Readers will get an exciting glimpse into how some of Hollywood’s most renowned talents thought and worked, with vivid portrayals of giants like John Ford and Frank Capra in action on the set. Covering the foibles, passions, inspirations and sometimes disordered personal lives of writers, producers, directors, actors and technicians, 1939 is a masterful portrait of Hollywood at work and play — plus a scandalously delightful sourcebook of movieland gossip that’s shocking even today.

1939 tells such amazing behind-the-scenes stories as:

Plus many more inside stories, production details, and personal revelations about the greatest movie stars of all time.

The perfect combination of film history, artistic appreciation, historical insight, and gossip, “1939: The Making of Six Great Films from Hollywood’s Greatest Year” is a book that no movie fan should miss.

Order your copy of “1939” today from Quill Driver Books.