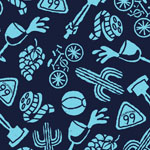 Sam McManis, the author of the new book Crossing California: A Cultural Topography of a State of Wonder and Weirdness, has been on the radio a lot lately talking about the amazing things he’s seen and eccentric people he’s met traveling the Golden State. Here are some of his recent radio appearances:

The Jefferson Exchange, Jefferson Public Radio: Exploring The Wonder And Weirdness Of California With Sam McManis

Crossing California is a unique guide to the state exploring California’s cultural uniqueness and well-deserved reputation for eccentricity. Based on McManis’ “Discoveries” columns for the Sacramento Bee, Crossing California collects his best reports from the oddball heart of California, profiling outsider artists, museums of the unusual, and dedicated weirdos of every stripe.

McManis’ tart and funny profiles of eccentricity and monomania will both entertain and give the reader a surprising sympathy for these people on the edge. All told, Crossing California is a trip.

Get your copy of Crossing California here!