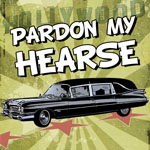 Our latest California history book, “Pardon My Hearse,” debuted with a bang today with a feature in Britain’s Daily Mail newspaper telling all about the book’s amazing revelations about the funeral of legendary movie star Marilyn Monroe.

“Pardon My Hearse” is the memoir of Allan Abbott, the “funeral director to the stars,” who worked on some of the most famous burials in Hollywood history, including the funerals of Monroe, Natalie Wood, Clark Gable, Gary Cooper, Karen Carpenter, Jack Benny, and Ernie Kovacs — just to name a few.

Abbott worked personally on preparing Marilyn Monroe’s body for her burial, which was in a shocking condition after lying face down for hours between death and the discovery of the body. Abbott dishes the full story of how Monroe was made presentable for the funeral in “Pardon My Hearse,” and you can read many of the gruesome details in the Daily Mail feature.

A treasure trove of insight and gossip you can’t get anywhere else, “Pardon My Hearse” is an eye-opening look at secret Hollywood from the man who literally knows where the bodies are buried.

Get your own copy of Pardon My Hearse today!